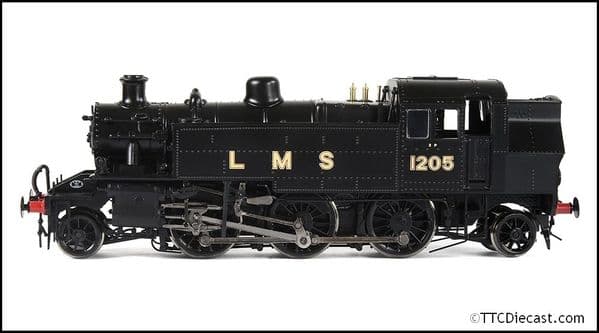 Bachmann
LMS Ivatt 2MT Tank
1205
LMS Black (Revised)
DCC Ready, not fitted (A Next 18 Decoder is necessary to convert this loco to DCC)

We are delighted to present the Bachmann Branchline LMS Ivatt 2MT Tank No. 41227 in BR Lined Black livery with British Railways wording on the tank sides.

Featuring a detailed and true-to-prototype bodyshell coupled with a high performance chassis which is driven by a five pole motor and complete with a Next18 DCC decoder socket and space for a speaker, this model is the perfect addition to any early-BR locomotive fleet to handle both freight and passenger traffic.

The London, Midland & Scottish Railway (LMS) lvatt Class 2 2-6-2 Tank Locomotive was designed by H. G. Ivatt with the first examples introduced in 1946. Using the Prairie wheel formation that had proven so successful for the GWR and had been used by Stanier and Fowler before him, Ivatt employed modern labour-saving devices such as self-emptying ashpans and rocking grates to make these Class 2 Tanks more economical than the elderly locos that had been inherited by the LMS and which these would replace. Designed for mixed traffic duties, just ten were built by the LMS before Nationalisation. British Railways constructed a further 120, of which 50 were fitted with Push-Pull equipment.

The type found use on both passenger and freight traffic, working mainly on branch lines across the London Midland Region, although the final 30 to be built were allocated to the Southern Region from new and others had spells on the Western Region. A year after the final example was built, the design became the basis of the BR Standard 2MT Tank, proving just how good a design the Ivatt 2MT Tank was.

Withdrawals began in 1962 and all had gone by 1967, but thankfully four survive in preservation.