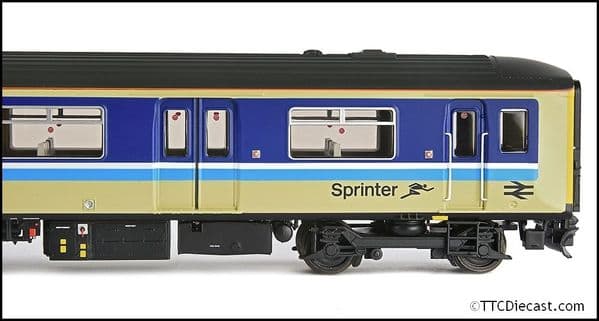 We are delighted to present the Bachmann Branchline Class 150/2 2-Car DMU in BR Provincial (Sprinter) livery as part of the Winter 2021 British Railway Announcements.

The Class 150/2 Diesel Multiple Units were characterised by the corridor connectors on the cab ends (as opposed to the flush ends of the 150/1s) and when first built the corridor doors had small windows, a feature not previously catered for on the Branchline model. However, following development of the tooling suite this feature can now be modelled authentically and is seen for the first time on this model of Class 150/2 No. 150247. Both vehicles that make up this two car unit are highly detailed on both the bodyshells and underframe, and the interiors are not overlooked either, all of which is enhanced by the exquisite livery application using authentic colours, graphics and logos. Powered by a five pole motor, the conductive coupling between the two vehicles means just a single DCC decoder is required for DCC operation – or why not opt for our SOUND FITTED version with its pre-fitted decoder and speaker and enjoy realistic sounds too.

The British Rail Class 150 ‘Sprinter’ is a class of diesel multiple unit passenger train built by BREL York from 1984 to 1987. A total of 137 units were produced in three main subclasses, replacing many of the earlier, first generation ‘heritage’ DMUs. The first subclass, the 150/0, comprised a pair of prototype units.