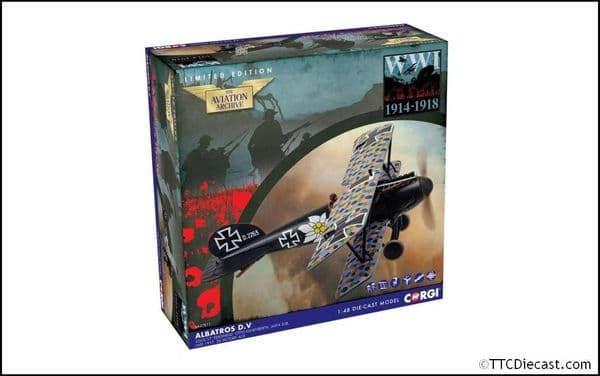 Product Info
Great War German fighter ace Otto Kissenberth has been described as being something of a character, brave and tenacious in the air, but a fighter pilot with a rather unusual trait - he flew combat missions whilst wearing his spectacles, something only two other Luftstreitkrfte fighter aces were known to have done. Given command of Royal Bavarian Jasta 23 at the beginning of August 1917, Kissenberth would continue his association with the Albatros D series of fighters and in particular, aircraft serial number D2263/17, a machine in which it is thought he would go on to score the majority of his 20 aerial victories. As his personal aircraft, it was distinctive by virtue of its smart black fuselage and the large yellow and white Edelweiss emblem it sported on either side of the fuselage, just behind the cockpit. Further adding to the fascinating story of this particular Great War Albatros ace, Kissenberth would claim a British RNAS Sopwith Camel for himself, an aircraft which had been forced down intact by another one of his unit™s pilots. Overpainting the aircraft™s British insignia with new, highly visible German markings (for obvious reasons), he apparently flew the aircraft on many occasions and incredibly, used this captured aircraft to score the last of his 20 victories on 16th May 1918, when he used it to bring down a British SE5a fighter near the town of Tilly-Neuville.